It has already been quite some time ago that Package Tracker (without the ‘s’) left the Windows platform, so in the mean time I had been using several Android solutions. Since may 2017 the Windows 10 Store has a new Packages Tracker app though, and I’ll tell you why it’s so good besides being a gorgeous design!

I can’t exactly remember how I stumbled upon this app, but it was a godsent after the quite mediocre Android apps that I tried. By the way, Packages Tracker is first and foremost a Windows 10 application, but an Android version is in the works, but I’ll get into that later.

Packages Tracker struck me as being beautifully designed, clean, visually pleasing and to the point, using the latest of the Fluent Design language being used in the latest versions of Windows 10, which obviously means we are talking about a full UWP Store app here. And I should also mention that this DOES mean it IS available for Windows Mobile 10 too (for the very few holding onto this dead platform).
Apart from featuring almost every carrier in the world that matters for your tracking of shipments, it also features a cloud backup and sync feature that lets you sync packages between all your devices with the app installed! To me this is the best feature: enter the package details on one device and have the info and notifications available on every other device that’s logged in with that same Microsoft account 🙂 (it syncs through Onedrive)

Have a look at some Windows 10 screenshots here: 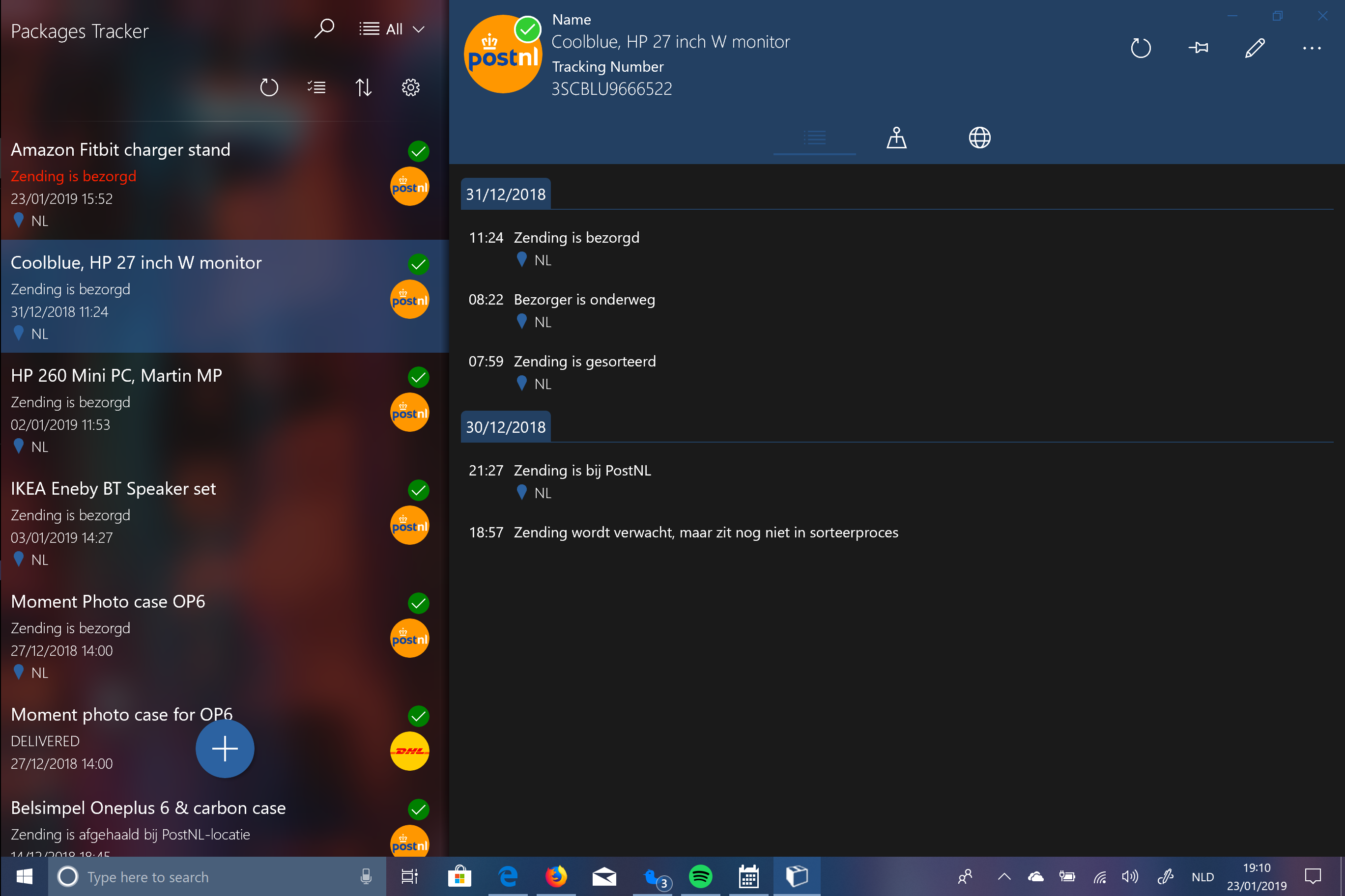 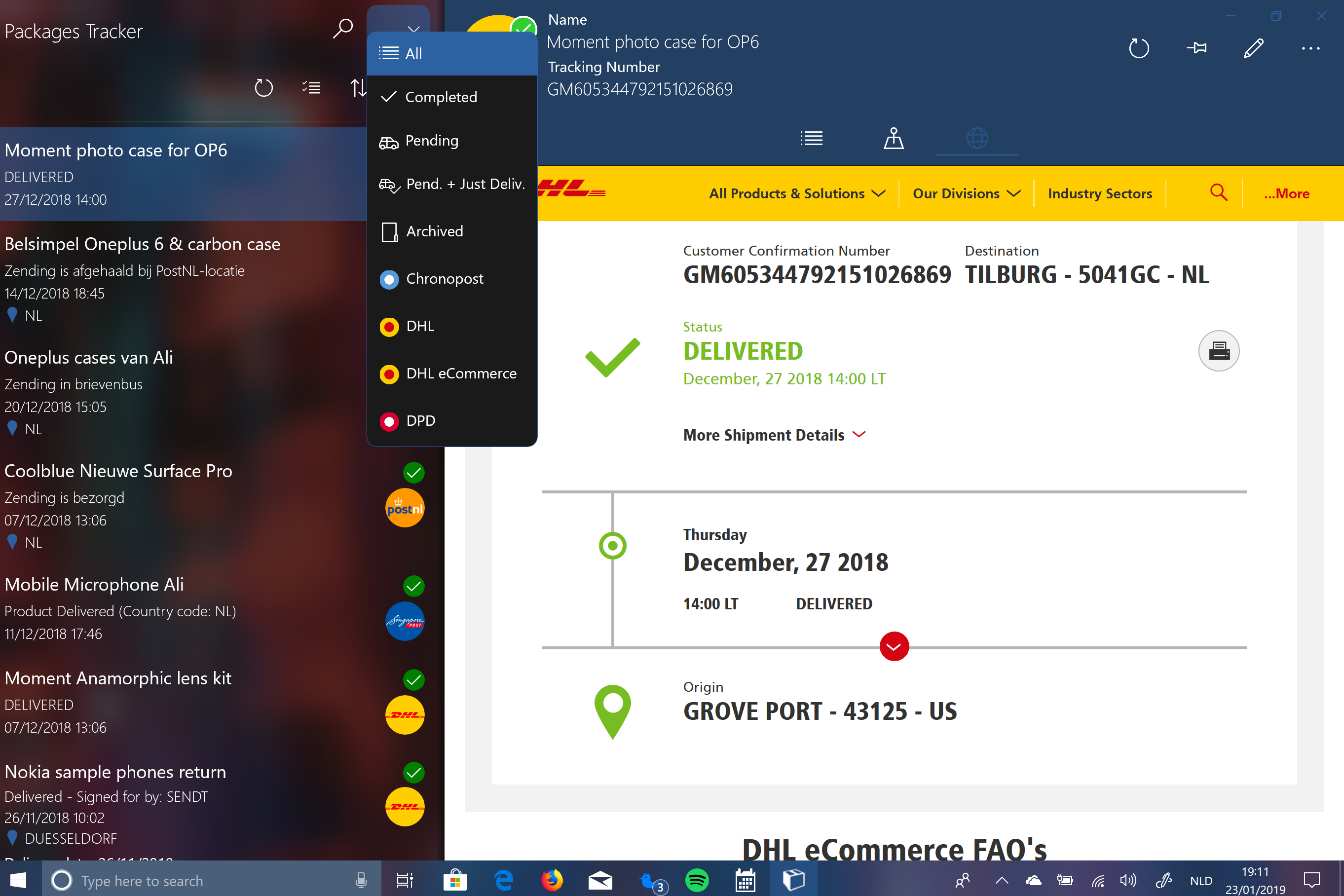 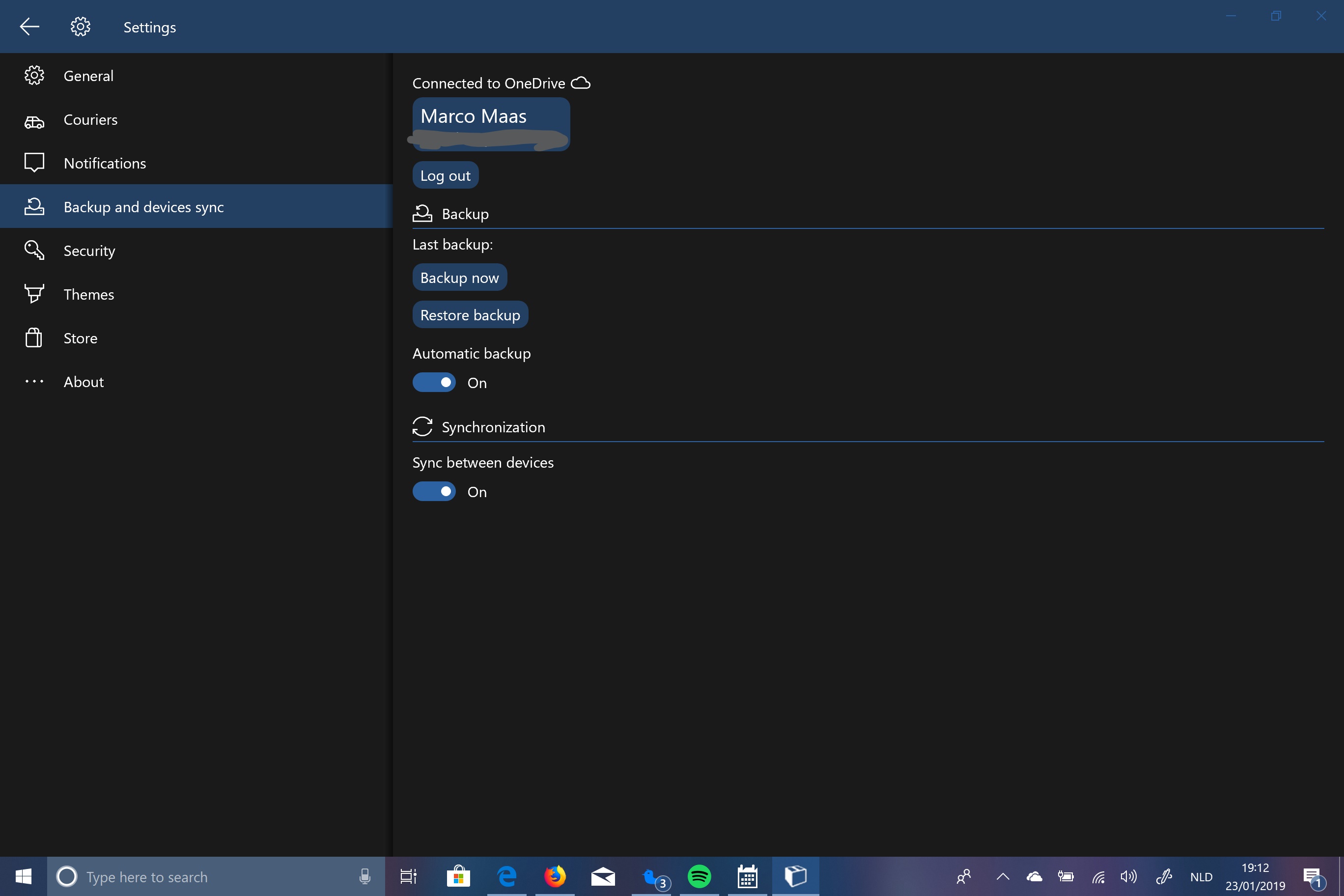 The app is free to use  without limitations for the first 15 packages. You can buy unlimited packages with an in-app purchase for just € 1,49 and additionally buy the man a coffee for € 0,99.
Here’s the download link: 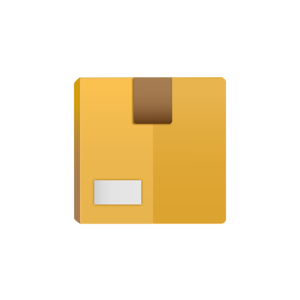 And now comes the best part of this application. I got in contact with the developer (a very nice guy from Madrid) to report some bugs I found and at the same time to ask him if he had ever considered developing an Android counterpart of his app (since developing crossplatform is all the rage these days), because the syncing feature through Onedrive would make that the most powerful crossplatform app for tracking your shipments out there!
Image a scenario like this: receive an email on your (Windows 10-) PC with track&trace info of your latest purchase and enter it into the app. Then without any user action (it syncs through the cloud to other installs), you’d have notifications on your phone too of every status update of the package! And if you’re a geek like me: even on your wrist by forwarding notifications of chosen apps to your Fitbit Ionic.
The other way around, entering the package from your Android (or W10M) phone, even gives you the option to scan the package barcode with the built-in camera. Likely most useful when you are the sending party.

So he surprised me by telling that he was already in an advanced stage of developing an Android version of Packages Tracker and he honoured me by joining me to the beta program of the app, that is running right now and is closing in on the release to market, with release candidates now in testing. We’ve had quite a ride with the notifications on Android, since a lot of Android OEM’s are quite aggressively killing background tasks, buit it seems everything is sorted out now and release is imminent.
The monetisation of the Android app will be a little different than the Windows 10 app by the way, by showing adds in the app in the free version, but you’ll get unlimited packages to track. Removing adds will cost you € 1,19 and getting the Pro version will set you back € 2,39. Make sure you get this Pro version once it is released because you’ll need this to get the syncing by means of Onedrive between all devices, which is by far it’s best feature! And again of course you can also buy the man a coffee for € 0,99.

The developer informed me that the Android version has left the beta and is offically released since 17 march 2019: Here are some screenshots of the, again, beautifully designed Android version of Packages Tracker (with Dark Mode as you can see!):