I’ve ventured into the world of wearables for the first time when I bought a Microsoft Band back in 2015, which continued into the Band 2 a year later and Microsoft ending its wearable adventure a year after that (with many problems in the 2nd gen Band). So I got myself a Fitbit Blaze (with the MSFT refund) to see how that would fair, and after I year I upgraded to this shiny new Ionic: Fitbits first true smartwatch attempt with an actual OS and apps.

That’s been a year ago now, so time to look back.

First of all I think it’s quite clear that from the start I didn’t really look for full blown smartwatch like most Android Wear devices, considering the Msft Band was also more of a health tracker than a smart device (it did feature a sort of Tile apps though and had a SDK). Some notifications from apps, preferably actionable, would be very nice though! And I kinda miss Band’s Cortana a bit, since the Fitbit devices have neither a speaker nor microphone.
The Ionic does feature however being waterproof down to 40 meters, and: …. Apps! 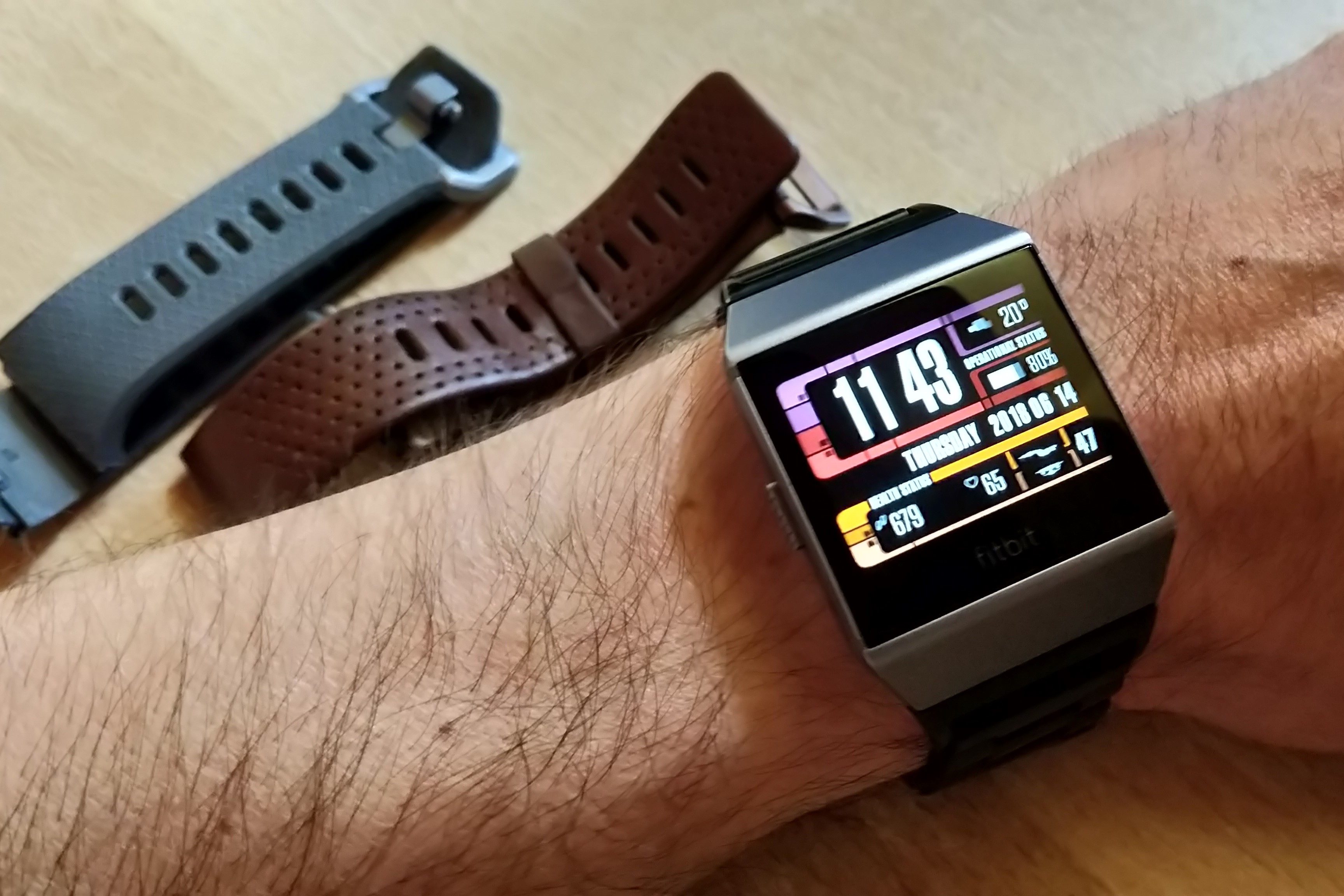 The watch itself isn’t that big as one would expect from the pictures on a website. As I said: smaller than most Tyzen or Wear OS offerings. Its casing is designwise a big no or just fine, depending on your taste… it is quite square. But the display is very good and a leap forward from the Blaze, and of course square, like the Ionic, so with maximum screen efficiency for text.

The waterproofing is excellent, though of course I can’t challenge the 40m claim… 😉 I’ve just been swimming with it. The bands are detachable my means of a nifty coupling system, that detaches close to the watches body. Even before the Ionic was available, there lots of aftermarket bands for low prices. Some of them with an adapter piece to the regular locking bar coupling (or how do you call that anyway?) so any watchband could be slapped on. I prefer the original leather band from Fitbit (expensive!) cause that really fits very snugly and makes the watch appear even smaller. Your choice of bands needs to take in account though that although the watch is waterproof, a leather band is not 🙂 .

The Ionics software gets updated on a regular basis by means of over the air software updates executed by the Fitbit companion app on the phone. Just recently Fitbit OS 3.0 was released with quite a few improvements, notably the performance, and also new apps in the gallery.
For the complete changelog on all different Fitbit OS updates until now, check this link:

Find out which feature enhancements and bug fixes are available in each Fitbit OS update.

And then there’s the Fitbit app on the phone to do the the bulk of making settings on the watch, and of course the enormous amount of fitness tracking stats, like sleep stats, steps stats, calories stats, weight stats, heartrate stats, excercise stats, and so on. All being displayed in a very comprehensive dashboard, which is of course configurable. Form that trackers (watch) page you can set it’s various settings, like which excercises should be on it for tracking? Set the preset answers to notifications, on an app to app basis if you like. Set which apps can notify on the watch, and so on.

I like this approach to a smart watch: have some basic smart stuff (actually quite a bit!), like take barcodes with you on your wrist, some basic notifications and actions to them, but mainly track your health. Which, besides all the geek stuff I’m discussing here, is what I actually use it for too: like track my Body Balance sessions, and of course my sleep.

Coming to this category: this has seen the most development since the Ionics release, because an ecosystem is being built here and the Ionic shipped without the option to reply to notifications. That feature shipped after a few months and since the app gallery has steadily been growing as well. The notifications have become more reliable too over the Fitbit OS updates we’ve had.

I actually use the reply feature sometimes (when I know there’s an appropriate answer among the 5 predefined ones), mostly with SMS and Whatsapp. Hardly anyone here uses Telegram or Signal, but these are set to notify as well. But what’s most convenient most of the time, is that the Fitbit app has (needs) access to your Androids notifications. Fitbit does a brilliant job at parsing these completely actionable. So for instance: my authenticator app throws a MFA prompt to deny/approve and I get exactly these buttons on my Ionic: ‘deny’ or ‘approve’. Super convenient, because I get these at work all day!
Many other apps also throw notifications with these kind of quick actions in the notification (for instance like or retweet a tweet), and you’ll get them exactly like that on the watch. Very useful! 😀

And then there’s the apps for the watch. And lets not forget watchfaces, but these are by now so numerous, it’s ridiculous to even consider reviewing. As you may have noticed; I use a Star Trek NG LCARS watchface with weather and lots of stats. The apps are starting to produce a few gems by now too. One I have been using since the start, is the app that holds barcodes and I use that to check-in to my gym club. More recently a Spotify controller appeared (can control any Spotify playing device your logged into) which is a gadget-freaks dream, and while writing this piece I discovered a new entry: a Swarm (Foursquare) app to check-in right from your wrist; another gadget-freaks wet dream… 😉

Have a look in the photo gallery for notifications and apps:

One of the things that has improved with the Ionic over the Blaze, is the charger cable which was REALLY awkward and fidly with the Blaze. However, it still is a small wobly connector that’s being held in place only by its small magnets, so don’t touch the watch while charging. It works if needed on the road, but I prefer charging a bit more lazy and better looking: I’ve got me a charging stand from Amazon for a few bucks and I throw it on there every time a head under the shower 🙂 It has a few very strong magnets next to the connector that hold your Ionic firmly attached to the contacts.

After a year I’m still happy with the Ionic and it gets better almost every day, with new apps and new OS updates. All I need now is a Sticky Notes app for the Ionic so I can sync my grocery-list onto it 🙂 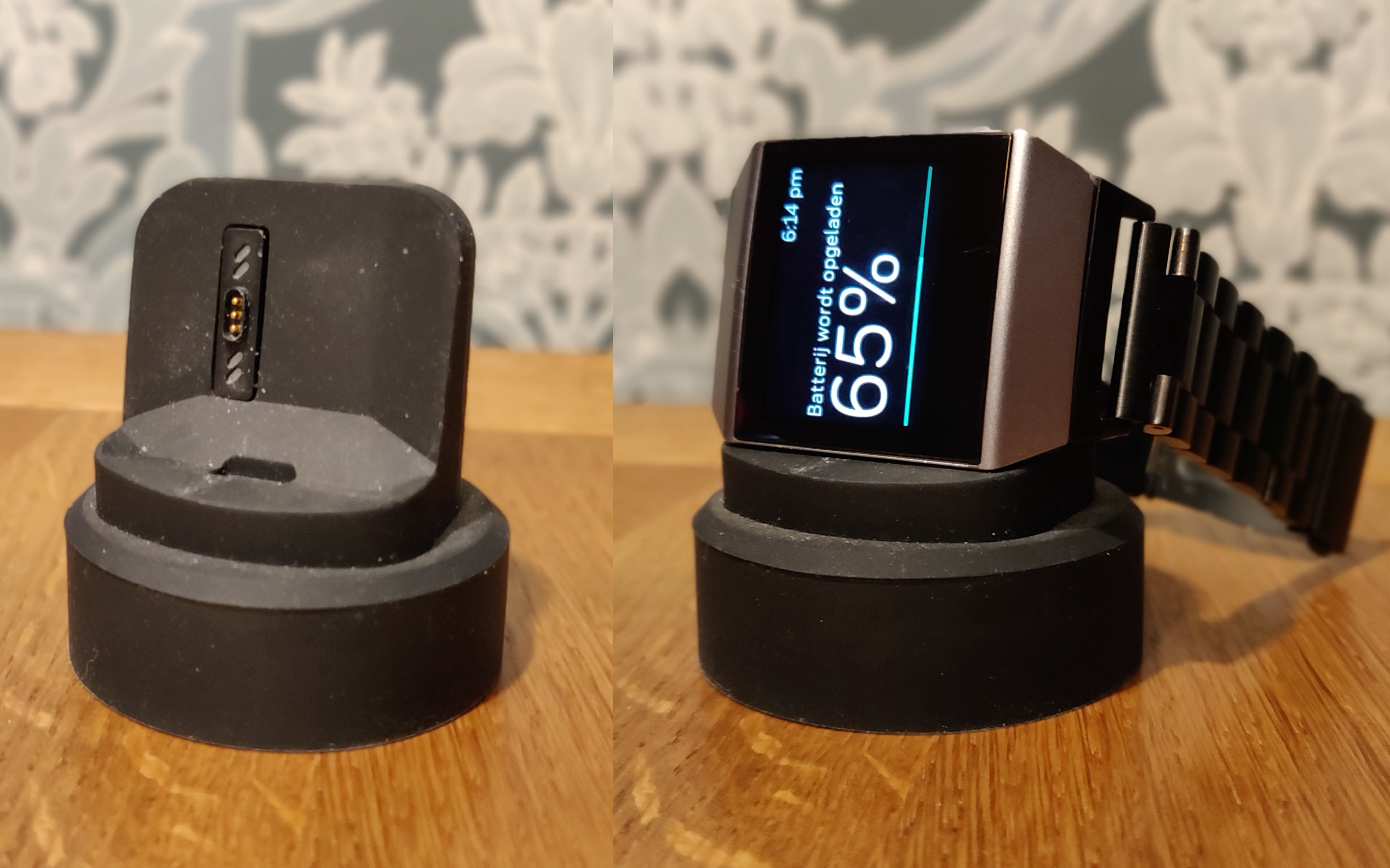