If you had a Windows Phone and are heavily invested into Microsoft’s ecosystem (also by means of your Windows 10 computer) like me, then you may want to read this post and find out how to get most features that you liked so much on a Windows Phone AND stay interoperable with your computer through these great Android apps.

I have used Android before many years ago and I must admit a lot has improved since, but the whole user experience is still a hideous mess if you ask me. But thanks to the very open nature of Android, and Microsoft going all the way with apps on that platform, there are many ways to taylor it much more to your needs. And a great way to do that is for starters by ditching the supplied launcher for Microsofts excellent and still quite new Microsoft Launcher (formerly known as Arrow Launcher).

Most supplied launchers are a hideous mess, but there’s a plethora of launchers in the Play Store, heck there’s even a bunch of launchers mimicking Windows 10, but actually; you don’t want that (it doesn’t bring the real functionality anyway…).

What I hated most was the totally garbled app list, usually spread over several pages in Android. And MS Launcher fixes this by grouping apps in alphabetical order in a single column. Hit the middle button in the app drawer or flick upwards (yes, there’s also lots of gestures) and there they are, nicely organised.
Then there’s the so called ‘Feed’  to the left which is highly configurable with so called ‘cards’, and there’s a ton of nifty things in there like a barcode scanner, share to (Windows 10) PC and if you’ve joined the beta program: also Cortana. I’ll post a bunch of screenshots here from my phone to show you what I’m talking about (click the images for a larger view). First up the search bar at the top your ‘Feed’ with the barcode scanner: 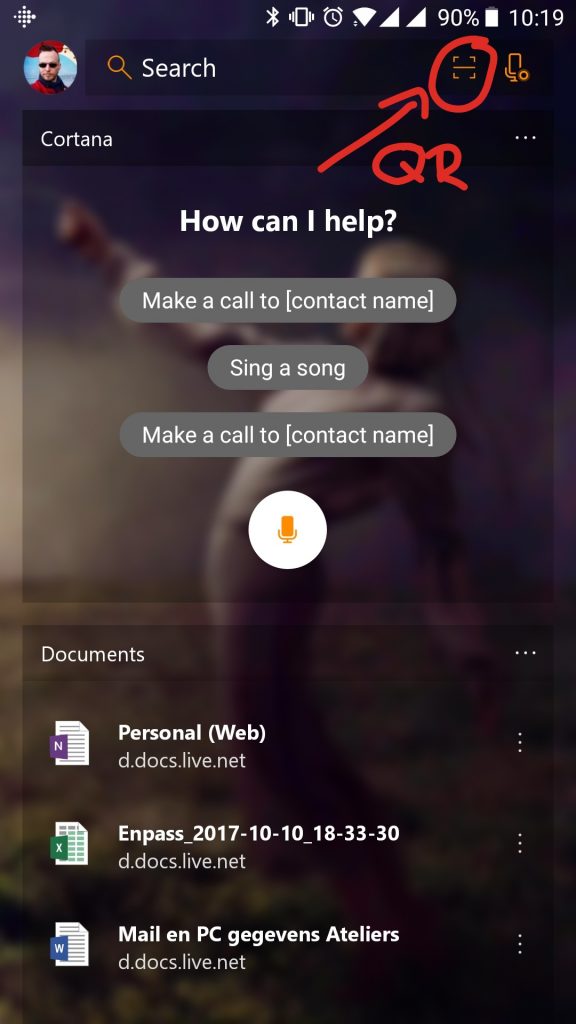 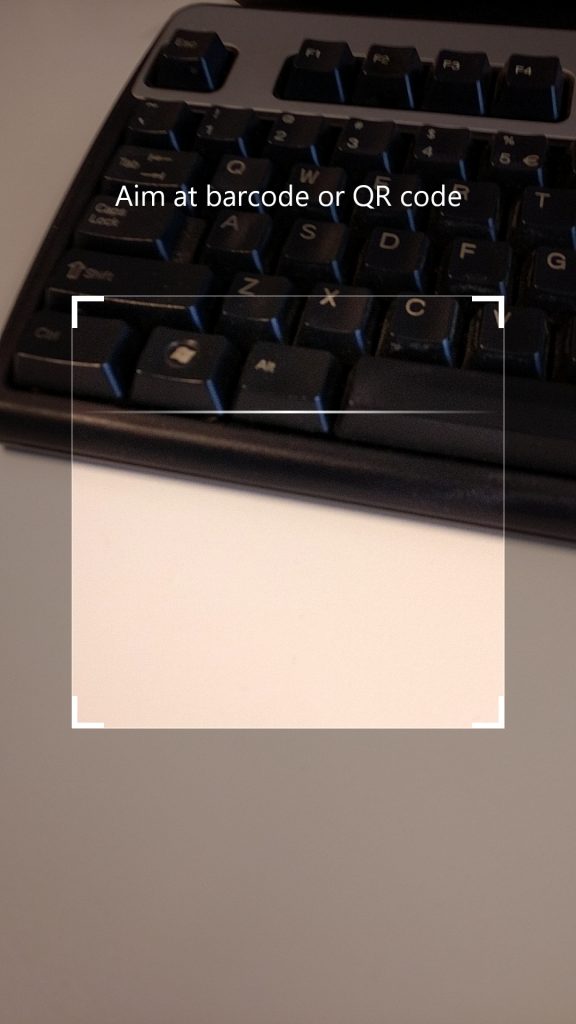 On any screen, if you flick from top to bottom (just lower than your notification curtain of course), you get the left screen with search bar and recently used apps. The right image shows the app list, nicely grouped in alphabetical order: 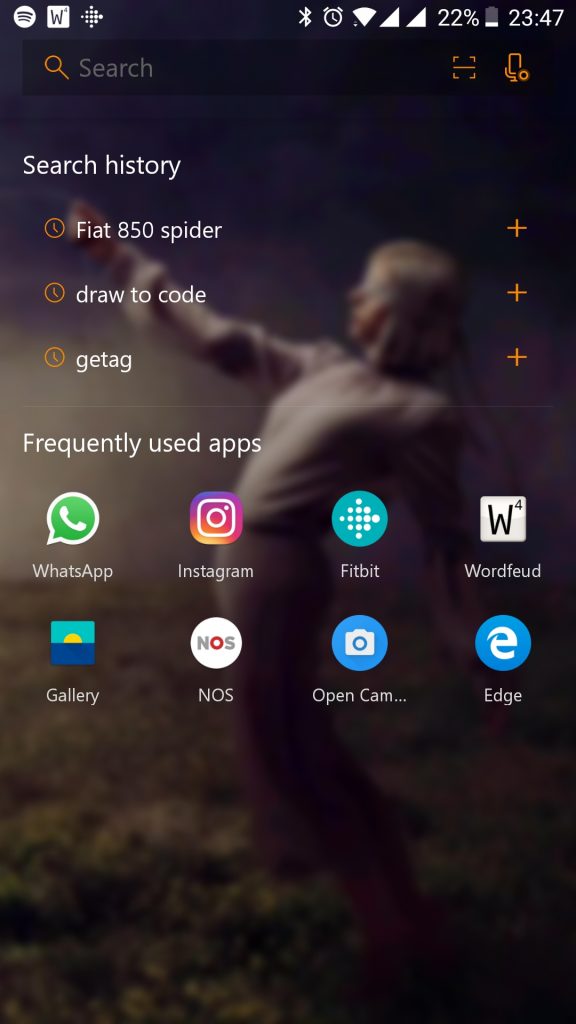 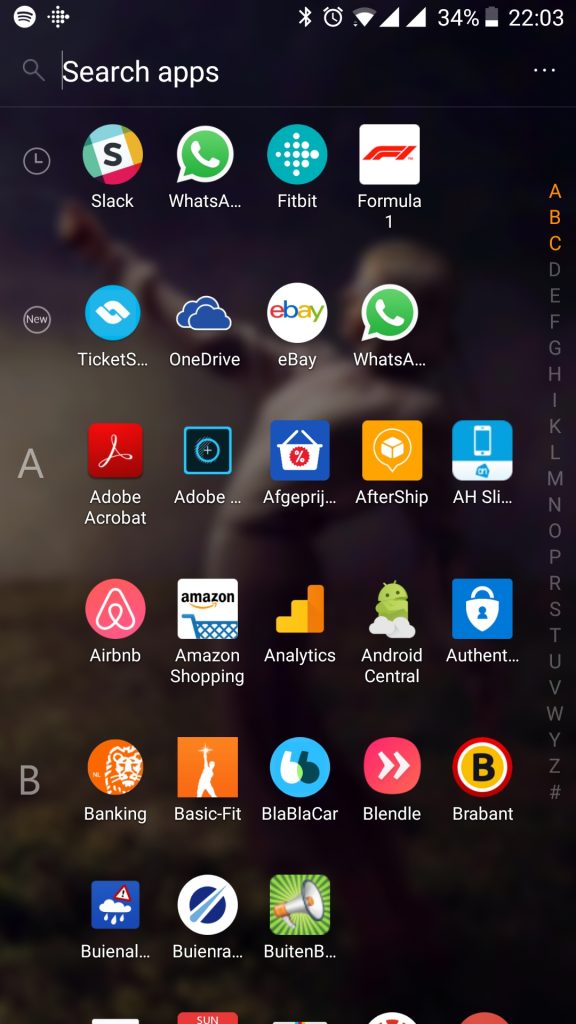 The left screenshot down below shows a documents widget in the ‘Feed’ with the option to “Continue on PC” as you can see in the image, effectively opening that document on your PC (Windows 10 “Fall Creators Update” aka v1709 required).
On the first screenshot above -pointing out the barcode scanner button- you also already saw the Cortana ‘card’ in the Feed. Pressing the mic-button triggers her and the right image below is the result of me yelling “Pharmacy …near” in the mic. Cortana does seem to work quite well, even in the Netherlands, as long as you speak english 😛 . I have just one problem with this Cortana iteration, and that’s the poor support (if any) for location based reminders (so far in this beta). 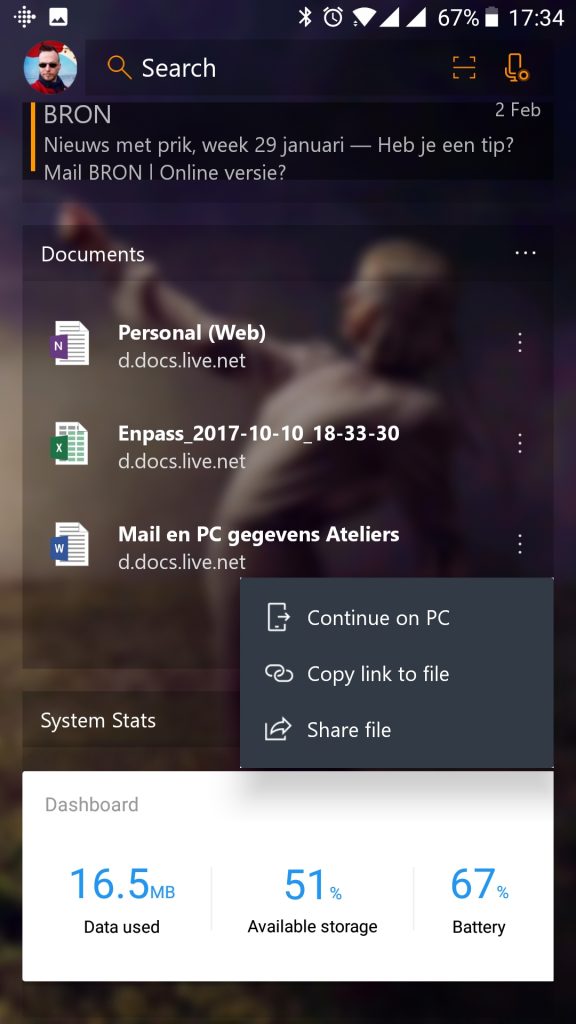 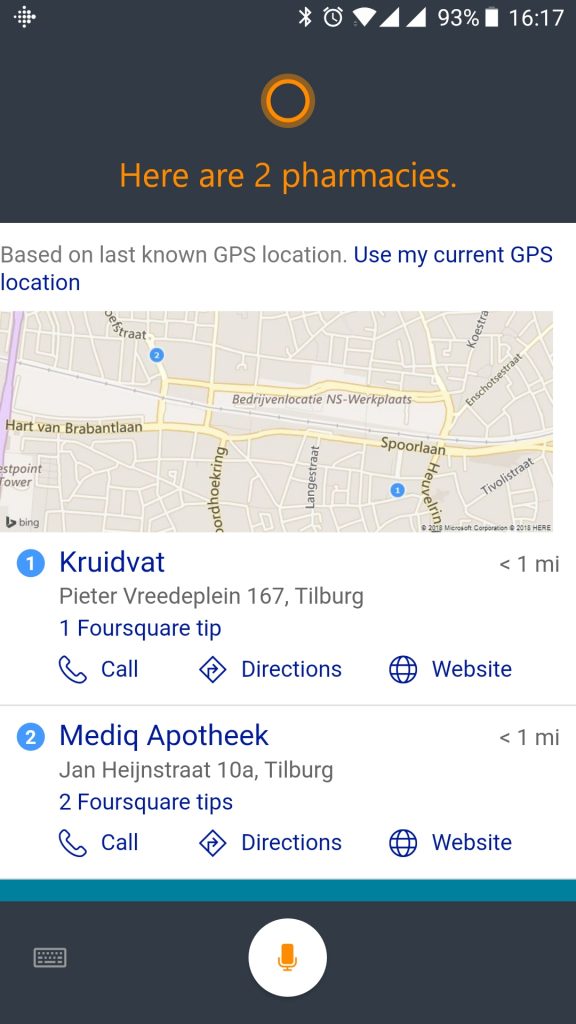 I’ll round it out with these two images, the left one showing the top side of the ‘Feed’ with a nice welcoming account tile and the calendar card. The right image shows the very nice detailed calendar view after you tap the ‘more’ button on the card. Of course you can configure what calendars to show and some more settings. 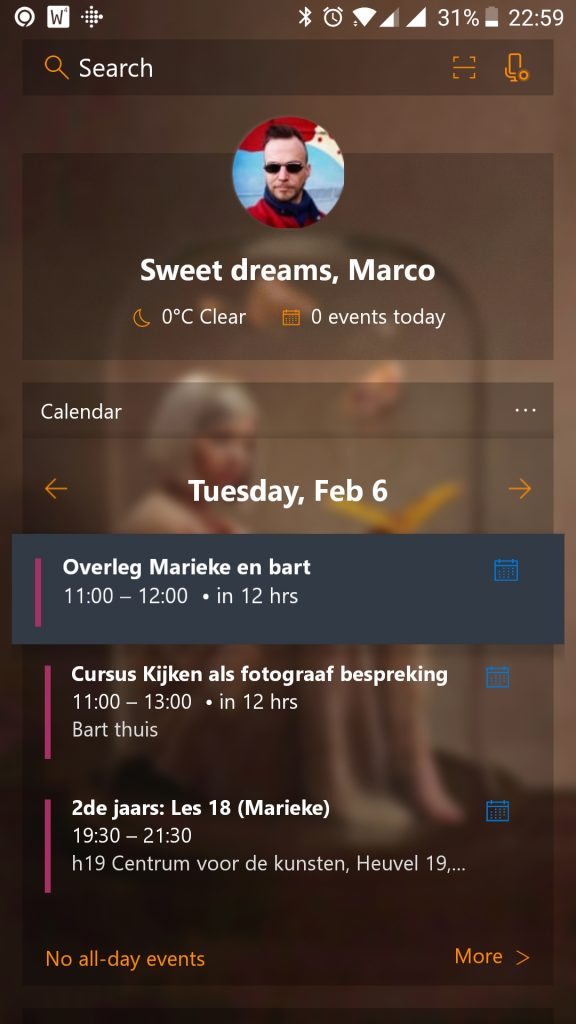 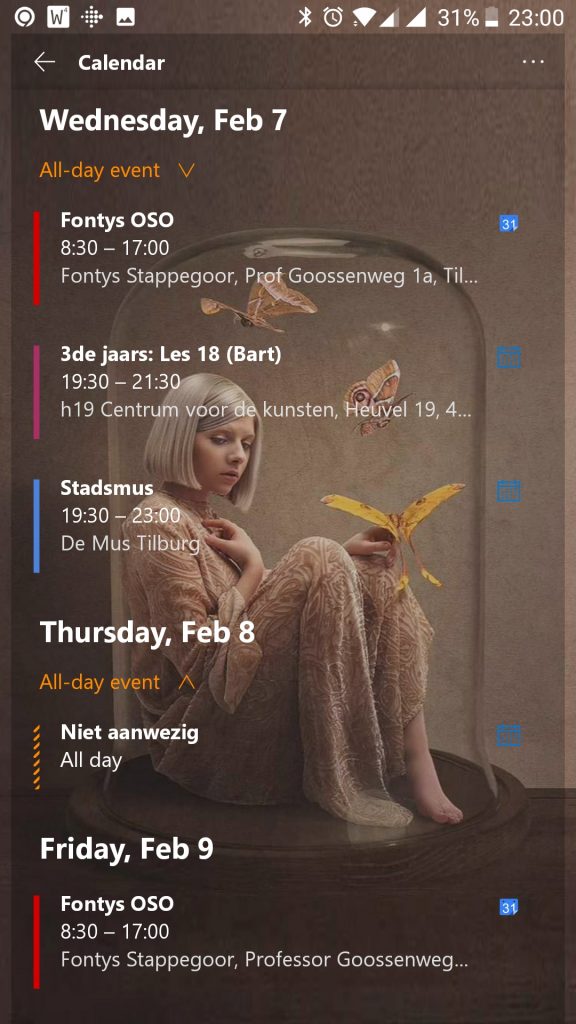 Microsoft Launcher has a ton more cool features, which I can’t all get into, but these were the most important to me and the most eye-catching ones. “Continue on PC” and  Cortana (if you run the beta) are most notable connections with your Windows 10 PC and if you ask me, that’s already reason enough to call this a must have.

If you want to get into the beta program and enjoy Cortana, all you need to do is follow this link from your mobile device and join the beta program. From that page you can continue downloading to the Microsoft Launcher beta in the Play Store. Using Cortana only requires you to set the language of the launcher to one of Cortana’s supported regions (like US, UK, IT, CA) as far as I could check.
For those not interested in Cortana or not wanting to try the latest features while putting up with some extra bugs…, skip the beta link above and go get MS Launcher right away through this Play Store link:

UPDATE: By now Microsoft’s MS Launcher 4.6 has come out of beta and was released to the general public. So everyone can now enjoy Cortana. It has also been confirmed by now that the launchers Cortana will work in any region, as long as you set the language of the Launcher app to ‘english’ instead of having it follow system settings (which is the default setting).

For all Windows 10 users (who happen to also actually use the Edge browser on their computers) this is a no-brainer. Edge syncs all your bookmarks and passwords over from the desktop Edge browser, and again in Edge there is the option to “Continue on PC” (Windows 10 “Fall Creators Update” aka v1709 required) if that mobile screen is just too small, or you wanna be reminded later to read something (send it to the notification centre in that case). You can also theme the browser in black, again like the desktop one, you can browse ‘InPrivate’ and there’s a nice reading mode. Let’s have some screenshots: 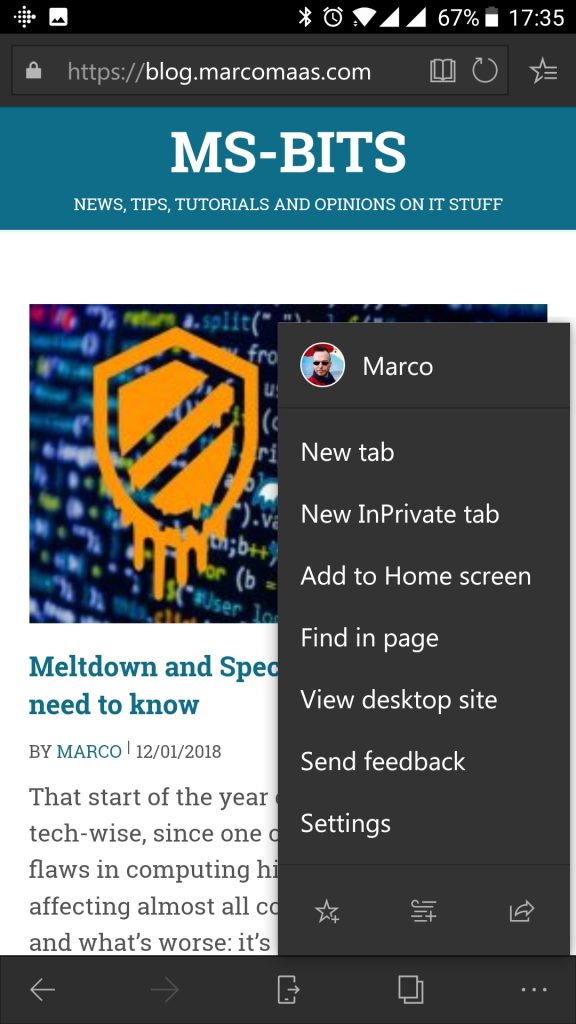 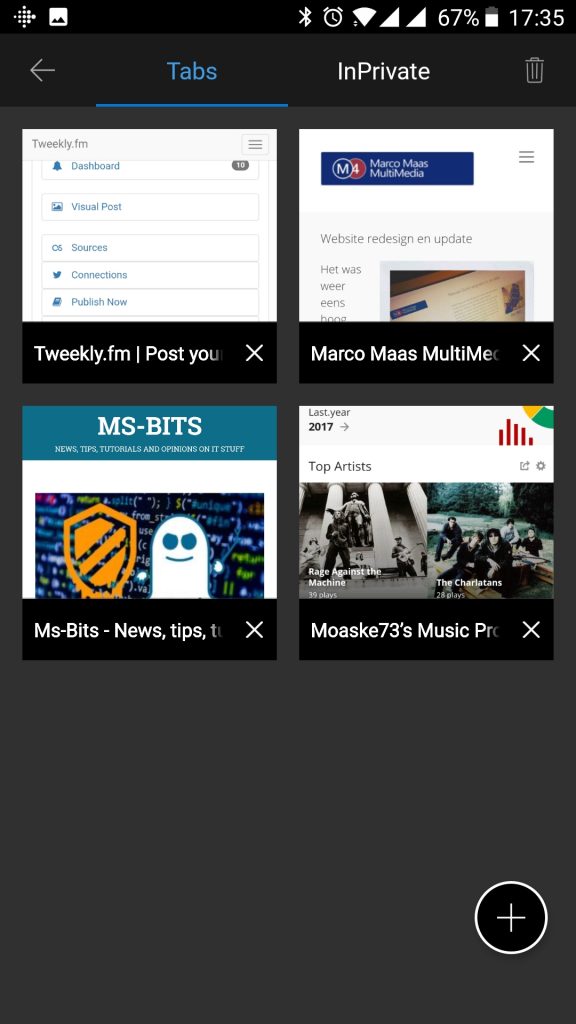 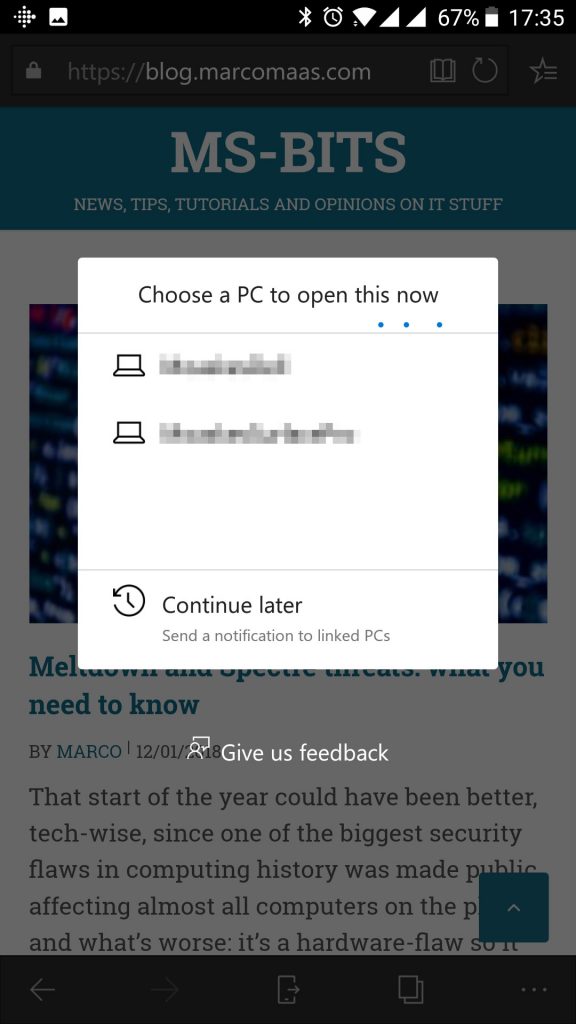 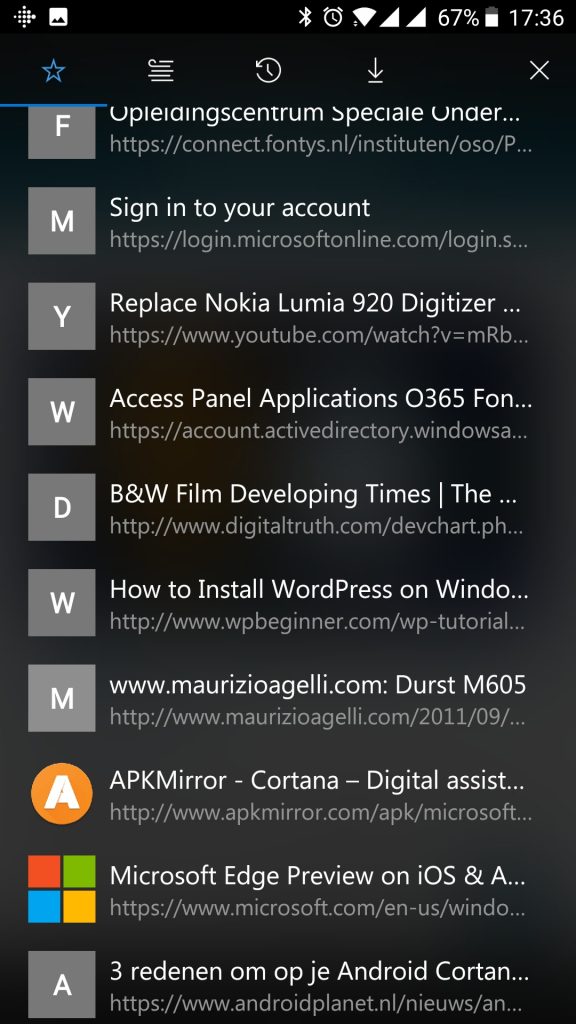 For the techies among us: Edge for Android does not use the same rendering engine as on Windows 10 PC. It uses (by Google requirement) the Chromium rendering engine. But that’s not the point of this app. It’s about the shell what matters: all the functionality (minus extensions) of the desktop counterpart, while also syncing your passwords and bookmarks and being able to send pages to your PC. It ties into Windows on your PC and that’s why this is a must have for Windows 10 users.

You can get it at the link below, but be aware that Edge for Android isn’t globally available and  you might live in a region that doesn’t offer it (yet). I got mine while this was also still in beta… 😉

The most painful part of Android is the lack of a decent Mail@CAlendar app. Then again, every manufacturer probably supplies one of their own cooked up apps, and of course the Play Store has thousands more available. The problem here being; how to find something that fills my needs in this ocean of apps, and also keeps a bit of the unmatched design (according to me) of the Windows 10 Mobile Mail&Calendar app.

After trying many (including Microsofts Outlook app and Googles GMail) and getting my frustration out on Twitter, a friend from the dutch developer cummunity tipped me of on this Nine app, or actually his Italian buddy at Microsoft:

Honor goes to @qmatteoq , he advised me getting it.

If you need to access Exchange for your work, this is one of the best choices out there. It works with setting flags, syncs all this stuff in your exchange account, applies security policies perfectly (requiring pin or biometric to access the app) and its design simply works for me. It has a dark theme for the listview (for that good ol’ Windows Mobile feeling), but if you like you can even dark theme the body of a message (the configurability is insane). What is also particularly nice, is that the formatting of the mail body to a smaller portrait screen has been done really well (lines of text get wrapped to the column-width while still having a readable font size).

Anyway, let’s illustrate this with some screenshots again: 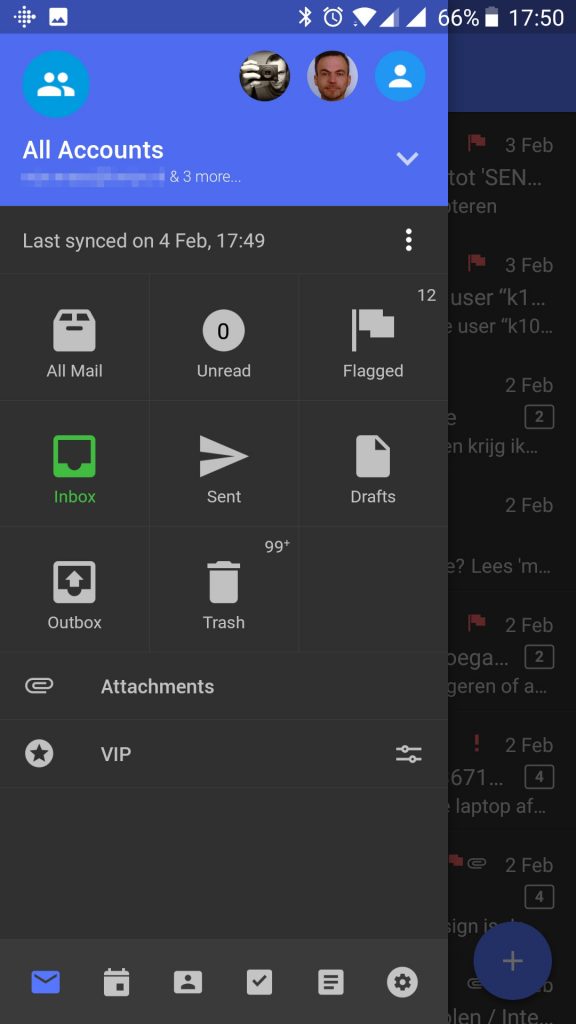 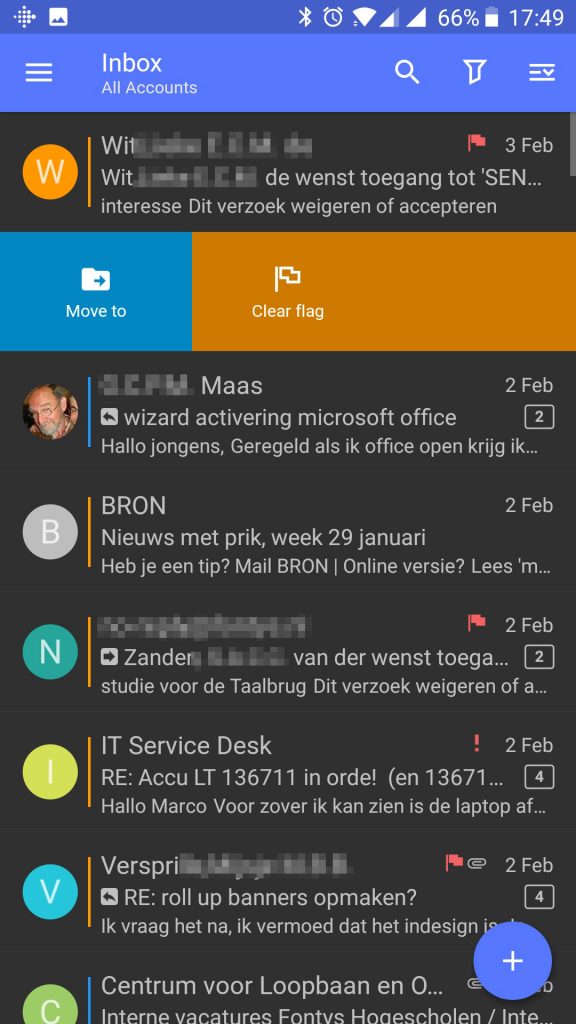 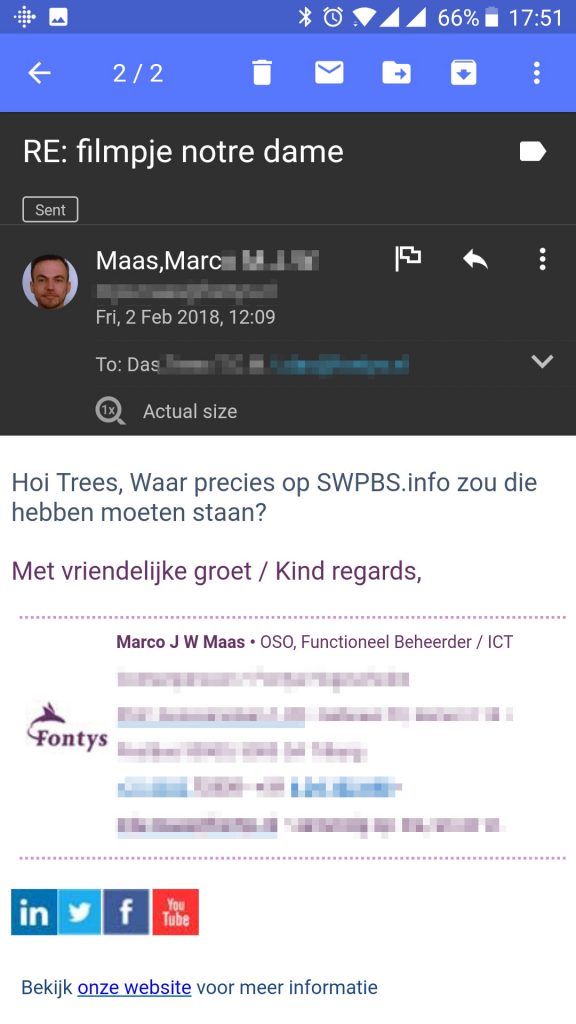 For me it’s mainly the email stuff that’s important, but there is a contacts and calendar section too, all tapping into your Exchange account and with a very nice design too.
There is one big caveat here though: the price of the app (no, it’s not free) is quite steep for a mobile app: €14,99. There is a full functioning two weeks trial period though, so that should be more than enough for you to decide if it’s worth the purchase for you. Get it on this link: 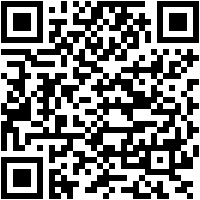 And then there’s the Navigation app. Coming from Windows Phone, I was used to using Nokia’s  Maps and Drive solutions, which later became HERE Maps and Drive. As we all know now, HERE was quite quick to withdraw from the Windows Phone platform, choosing for Android with their presence. So basically, with HERE we Go I chose the navigation solution I already knew, Navigon regrettably not being an option anymore since I would need to shell out some 60 euros again because of the platform switch 🙄
But also for the reason that I just don’t like the default Google stuff very much (have you ever heard that hideous voice guidance in Google Maps?), so I started looking for alternatives. HERE we Go is free, just like it was back on the Nokia’s, it supports offline maps, public transportation (as wel as walking) and has a much more pleasant voice guidance. It’s not the best Navigation choice over all (that would be Navigon I guess), but in the free section I think it is 🙂 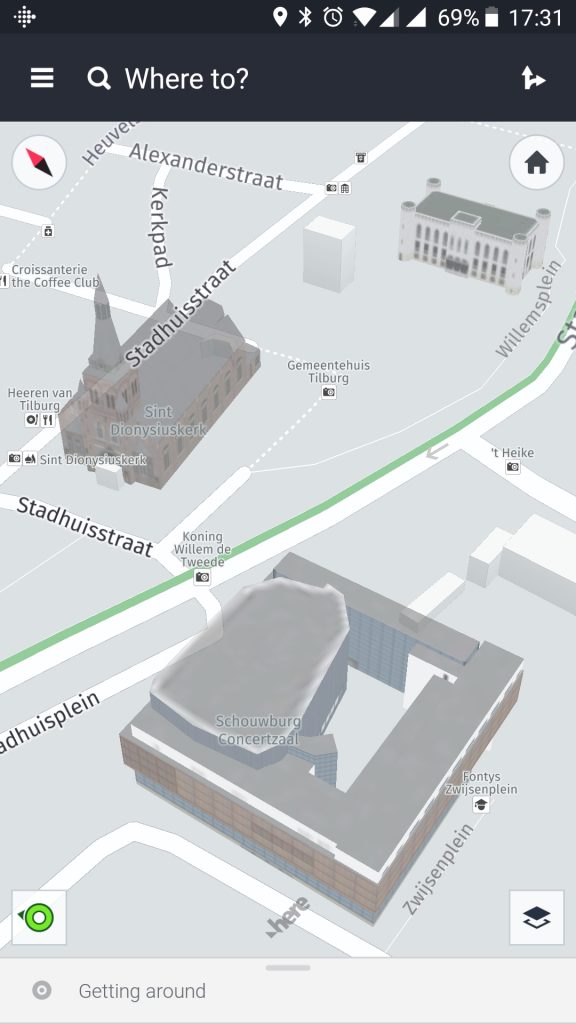 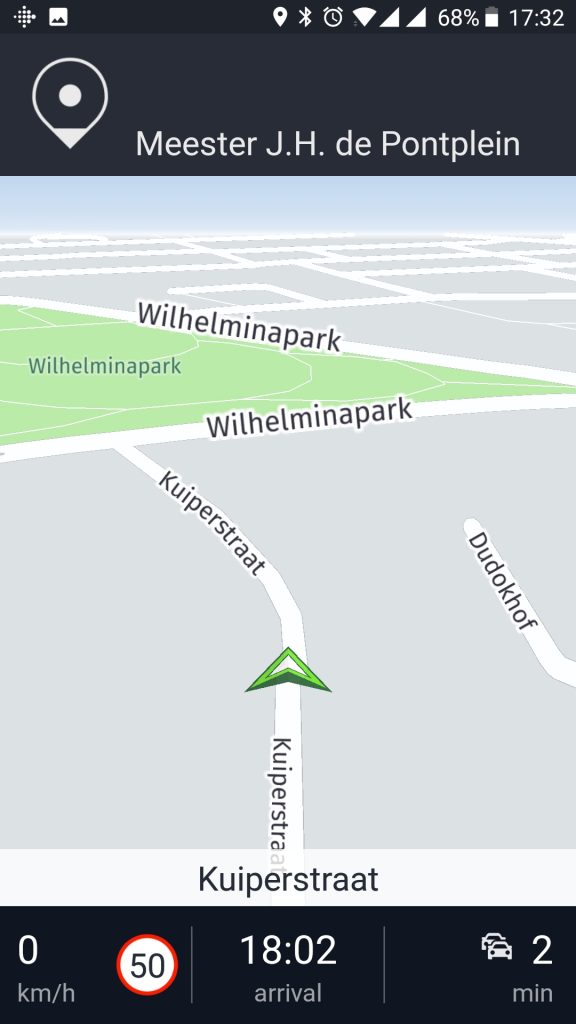 This app used to be just a long list of Microsoft apps on the Android platform, but has been morphed into this new connection app that connects your Android phone to your Windows 10 PC (since Win10 v1809) to sync messages and recent photos.
Once connected however, it still features Micrsofts app catalogue when you scroll further down. Of course you’ll find the obvious ones like the complete Office suite, Outlook, Skype, etc.:

And to conclude this blog, I leave you with this simple freeware Gallery app for Android phones. Since the resurgence of the Nokia brand and their push for Android One phones (Vanilla Android image) I thought I’d add this one because without it you’ll be forced to use Google Photos on these devices to view the pictures you just made, and I can imagine that a lot of you (like me) don’t like that idea… 😉 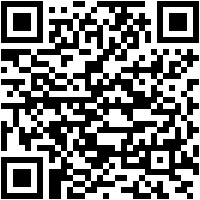 Note: Featured image of this blog credited to: Windows Central

THAT WAS NOT FUCKING NEEDED.